Camac’s founder, Joël Garnier, began his professional life in the French Marines, where he trained as an electronics engineer. He then spent ten years in commerce, demonstrating an unexpected flair for promotion and marketing, and went on to become the company’s Chief Marketing Executive. In was in 1972, however, that he found his real direction, when, going into partnership with his younger brother Gérard, he began trading as Camac in his native Brittany.

In line with the Celtic revival of the 1970s – the enthusiasm for folk and world music of the time – the Societé Camac began life manufacturing and importing Indian flutes, hurdy gurdys; Vosges spinets; Scottish bagpipes; dulcimers; and – really Breton – bombardes and Breton bagpipes. It was in response to requests from some of their clients that Gérard and Joël Garnier began to look into lever harps.

The brothers began by importing Japanese lever harps (the market leaders at the time). This was followed by the release of a first Camac Bardic harp in 1972, a larger Mélusine model in 1976, and a steady extension of the lever harp range.

Some years later, Joël Garnier was unforgiving about his earliest instruments: ‘the harps were not ugly, but their reliability left something to be desired. Quite honestly, they were mediocre. At what point did I begin to interest myself seriously in the harp and its problems? I made it my business to meet with as many harpists as possible. Little by little, I discovered the harp, its music, the harpists themselves, and I came genuinely to love them. In addition, that at this time 95% of Celtic harps were Japanese models was a challenge I wanted to take up.”

His love for the harp and the artists who played it manifested itself in an impassioned mission to improve the instrument from a technological point of view. After the success of the Blue Harp, he began a seven-year period of research into concert harp design. This research culminated in his New Generation harps, with their ergonomic string spacing, even sound, a more reliable and precise mechanism and faster, easier regulation.

Presentation of the Memory Harp to Isabelle Perrin and Marileine BouchaudWithin a few years, Camac had come to occupy 95% of the Breton lever harp market. It also played a major role in the pedal harp market, as this instrument’s sole French manufacturer. In 1985, Gérard and Joël Garnier decided to divide Camac into two companies. While Joël had begun as the Societé Camac’s commercial director, he had become so interested in harp making that he set up “Camac Productions”, still based in Mouzeil and dedicated exclusively to the harp.

Before Joël’s untimely death in 2000, Camac Productions had released – among others – lever electroharps, the now iconic electroacoustic blue harp, the extraordinary, computer-powered Memory Harp, and the ‘New Generation’ range of fine concert instruments.
Joël’s life’s work was cut off all too soon, but his spirit is always with us: finding modern solutions to traditional problems, listening to the desires and needs of harpists, and striving to make our harps better and better.

In 2010, we held a concert in Paris on the tenth anniversary of Joël Garnier’s death. We were touched beyond words by the response of the harp community to the occasion: the concert sold out before we had finished printing the poster, and every artist invited to play accepted immediately.

The concert itself was a joyous evening, with a rich and varied programme Mariannig Larc’hantec described to me afterwards as “pure Joël”, lover of the harp in all its forms.One great harpist who knew Joël – Ann Griffiths – wrote an obituary for him, which was reprinted in our tribute concert programme.

Unforgettable Blue Harp and panpipe duo at the Frankfurt Music Fair”Whatever the problem, Joël’s response was always “je vais penser à cela”, and invariably he would come up with a solution, whether it was a mechanical problem or a practical one like moving the harp about (the memory of Joël pushing his harp through the amazed crowds in Cardiff City Centre on his truly genial trolley will always be with me).

Everyone respected him, but everyone adored him. He was so loveable, so concerned, so generous, so young in outlook, so full of joy and enthusiasm for life – joining in the festival atmosphere and dancing an impromptu ‘jota’ on the pavement at San Lorenzo de El Escorial, enthusiastically buying up 100 of Haza wine (the San Lorenzo grocery store’s complete supply for a whole year!), enjoying good food, good wine, home-made brown bread, the lobster – fresh from the sea – he cooked so lovingly at his holiday flat at Pornic, and taking the greatest pride and joy in his Jaguar car. A new house was to be built above Oudon, overlooking the Loire valley; the marble had been brought from Turkey to floor it, and the pictures had been bought to adorn it.
Respected and admired by all the other harp makers, Joël was adored by the hundreds of harpists, both young and established, whose lives he touched with his love, his generosity, his boundless enthusiasm and his constant striving for perfection in all things. “A passion for perfection” was the maxim by which he lived. He had an eye for beauty, and although not a trained musician, he had an exceptional ear for quality of sound; when, though, he listened to music, he listened with his heart.Sadly, the house was never completed – sadder still, the ‘Garnier’, the harp to which he had hoped, in the year 2000, at last to give his own name, was destined never to see the light of day.

Joël never needed any encouragement to get on the dance floor! Joël was a very special person, and expressing one’s sense of loss at his passing is very difficult. The World Harp Congress extends its deepest sympathy to his wife, Michelle, his children, his grandchildren, his employees and all the many harpists around the world whose lives he had touched with his love. 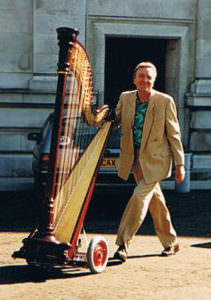 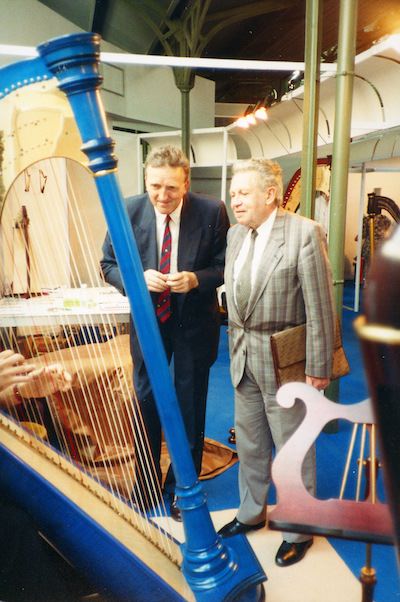