Back in November 2020, we realised our first series of online concerts. We did this at lightening speed, in response to the lockdowns throughout much of the world at this time. Little did we anticipate the huge success these concerts would have, the wonderful variety of music, styles and genres we would experience – or that, come the Spring, 16 beautiful recitals would have been performed and broadcasted: season I and season II.

But! Good things come in threes, and next Thursday, the third season of Les Jeudis de la Harpe will begin. As ever, the concerts are free of charge on YouTube: just log on to @CamacHarpsOfficial at 19:30 CET every Thursday to enjoy the premier. 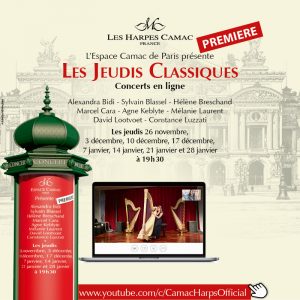 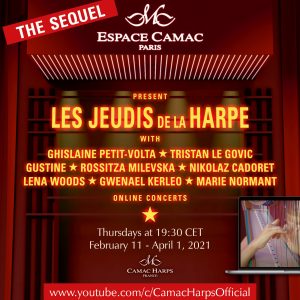 And then came season II…click here to go to the playlist!

We will begin with none other than Myrdhin, Breton Celtic legend. The concert also marks the beginning of his 50th year on stage, and we are very honoured that he is sharing this moment with us.

Born in Upper Brittany to a Cornish family, Myrdhin is one of the driving forces behind the revival of the Celtic harp in Brittany. Since the 1970s he has been applauded both in France and abroad: in Germany, Austria, Belgium, Canada, Great Britain, Denmark, Switzerland, Netherlands, Turkey, Poland, Russia, Italy, Japan, Spain, Portugal, Norway, and Paraguay.

He has received numerous awards, such as the Triskell d’Or, Kan ar Bobl, 1st prizes for harp and singing in Killarney-Ireland, Nancy Richards’s Trophy in Wales, J.M.F. and France Musique awards, and the Chevalier des Arts et des Lettres in 2002. In 2000, as part of AFROCELT, MYRDHIN was nominated for a Grammy Award in Los Angeles (world music category).

He draws his inspiration from the natural environment in Brittany, and has been playing on bronze- and metal- strung harps since 1975.