On a silver screen near you…the second series of our YouTube concerts!

Les Jeudis de la Harpe began on February 11, 2021, and was full of the richness and variety of the 21st-century harp. The series featured classical music, traditional music, jazz…and stars of The Voice France!

We were delighted to work once again with Julien Hanck Productions. All videos are still available to enjoy, full-length and free of charge, @CamacHarpsOfficial on YouTube. 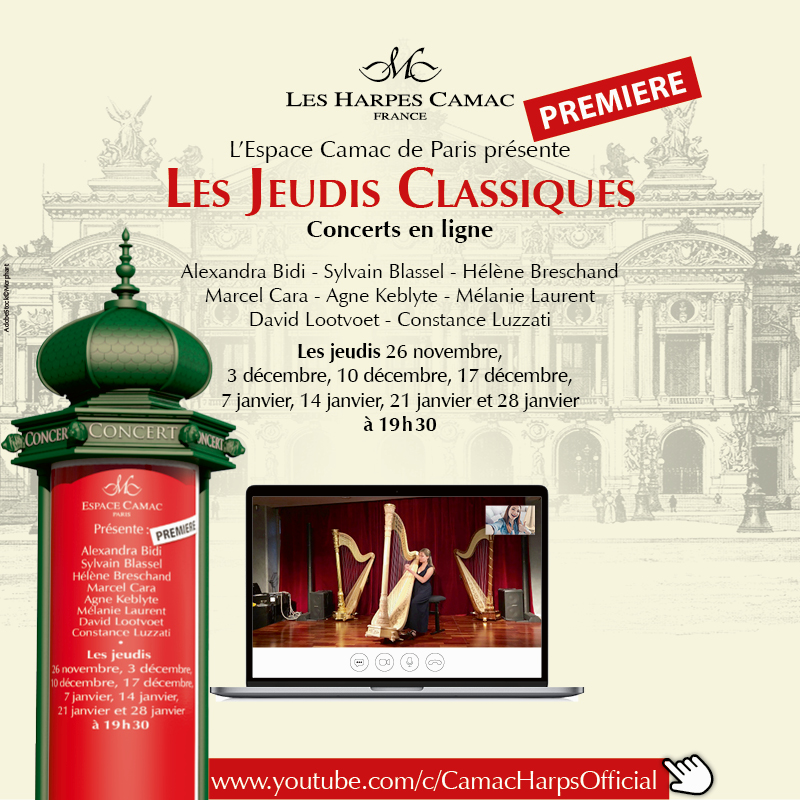 Lena Woods started playing the harp at the age of 7, thanks to her harpist mother! After graduating from high school, she formed her first rock band, Grand Square Dance, with whom she toured the Normandy stages for 5 years. Alongside various musical projects, she joined the American School Of Modern Music in Paris. The following year she entered the Rouen Conservatory, specialising in jazz and singing.

In 2012, she participated in the International Harp Festival in Ancenis (France) in celebration of Camac Harps’ 40th anniversary. She then joined the Paris Regional Conservatory, specialising in contemporary music. There, she formed the group Northern Lights, created around the electric harp and its compositions. They released their EP in 2014.
In 2014, she represented France at the International Harp Festival in Paraguay, and formed a new band – Nobody’s Cult. Her electric harp sound became more and more individual, using effects pedals and a guitar amp. A 1st EP „Echoes From The Temple” was released in 2017, followed by many concerts throughout France. In 2016, she took part in the show The Voice and reached the quarter-finals.

Nobody’s Cult’s first album will be released in April 2021.

Tristan Le Govic is internationally-recognised as one of the leading Celtic harpers today. He has performed throughout Ireland, Scotland and Sweden, as well as his native Brittany. He has honed his musical diversity together with musicians such as the Breton accordionist Samuel Le Hénanff, Scottish double bass player Stuart Macpherson, English drummer Roy Shearer, and the Swedish singer Lise Enochsson, with whom has developed a unique repertoire of Scandinavian music on the Celtic harp (Elva).

With Tangi Le Hénanff (bass) and Alan Quéré-Moysan (drum), he created the Tristan Le Govic Trio. They won the Nevez Flamm Trophy for the best Fest Noz band of 2018, and have released a group album: Dañs.

Tristan has made several other recordings, and is the author of numerous collections of music for lever harp. He edited the Breton Harp Anthology in 2015.

Born in Toulouse, Marie Normant entered the Paris Conservatoire (CNSMDP), in the class of Marie-Claire Jamet. At the age of 18, she was unanimously awarded a first prize in chamber music, followed by a first prize in harp, before joining the postgraduate class of Isabelle Moretti.

In 1998, she won the “Avant-Scènes” competition (across all instruments). In 1999 she won the SACEM Prize at the Lily Laskine International Competition.

Since 2001 Marie Normant has been principal harpist with the Orchestre de la Garde Républicaine in Paris.

Rossitza Milevska is a harpist, pianist and singer, doubly accomplished as a classical musician and a jazz artist. She studied harp and piano at the National Music School of Sofia in her native Bulgaria, followed by an advanced diploma in harp at the National Academy of Music. She continued her studies at the Conservatoire National à Rayonnement Régional de Nice in jazz piano & jazz harp with Robert Persi, and at the Institut d’Enseignement Supérieur de la Musique Europe et Méditerranée where she obtained her teaching diploma. In 2011, she became the first harpist to graduate in jazz harp from a French conservatoire.

Gwenael Kerleo, Breton harpist and composer, chose a musical and creative path at a very young age. As a highly sensitive child, she found a safe haven in music, and the Celtic harp became her instrument.

Gwenael Kerleo is now established as one of the major Celtic harpists in Brittany. Her music has also touched music lovers throughout the world: from Japan to Paraguay, via Hungary, Germany and Russia.

She confides her stories to her audiences with modesty and feeling. Despite the challenges everybody must face in the world, her music is full of hope, and the sense the best is yet to come.

Gwenael’s latest programme, ”Meeting with an Angel”, is an invitation to share in the harmony she senses, in a moment of pure happiness that she would like to last forever.

Ghislaine Petit-Volta studied the harp with Brigitte Sylvestre and Pierre Jamet, then Gérard Devos and Christian Lardé at the Conservatoire National Supérieur de Musique de Paris. She obtained a first prize for harp in 1981 and a first prize for chamber music in 1982. She remains a very active chamber musician (with the Trio Antara and the Collège Contemporain, among others), and soloist in France and abroad. She is professor at the Conservatoire National de Région de Paris, at the Pôle Supérieur Paris-Boulogne, and in the pedagogy department of the Paris Conservatoire CNSMDP.

Ghislaine’s recordings range from medieval music for Harmonia Mundi, to contemporary music for Deutsche Grammophon. She recently released a CD in homage to Rameau on the Suoni e Colori label.

Entitled “Madame de Genlis: a music lesson”, Ghislaine’s programme will take us on a journey into the world of the early pedal harp. Works by Rameau, Bochsa, Duphly, Krumpholtz and even Queen Marie-Antoinette are all on the programme. All works are taken from the notebooks of Stéphanie-Félicité, Comtesse de Genlis (1746 – 1830), renowned for her talent as a harpist and her promotion of the harp’s repertoire.

“Madame de Genlis began the harp in 1759, on the first pedal harps that arrived from Germany. Goepffert, her teacher, had performed on these harps at a “Concert Spirituel”. Mme de Genlis was quick to complain about the lack of repertoire: “As there were only a few silly things engraved for the harp by Gaiffre (Goepffert), I started to play harpsichord pieces, and soon some of the most difficult, by Rameau, Mondonville, Scarlatti, Handel…”. Indeed, there was no specific repertoire for the harp at the time. It seemed to be used mainly for accompaniment, as is the case in Marie-Antoinette’s “Romance”. Krumpholtz remediated this lack of original repertoire, and many others were to follow. Bochsa, whose first wife was none other than the niece of Madame de Genlis, would compose prolifically for her instrument.” 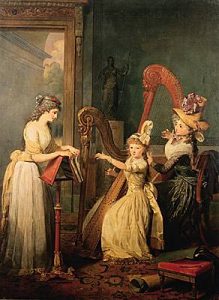 Singer, harpist, pianist, composer, producer… Gustine is a musical omnivore, a multifaceted artist – a free electron! Since her studies at the Reims Conservatory with Dominique Demogeot, and a stint at the Cefedem de Lorraine where she obtained her national qualifications in teaching and contemporary music, Gustine has devoted herself to performance and creation. She has collaborated with many artists, written music for contemporary dance, spent 4 years on tour with DJ Fakear (electro), composed a pop piece for symphony orchestra, accompanied Albin de la Simone at the Philharmonie de Paris, sung at the Stade de France for the Rolling Stones – and was discovered by the whole of France on the TV show The Voice.

Gustine will soon release her first album as a songwriter and arranger. Hear her here unplugged, alone with her harp.

We will begin with Nikolaz Cadoret, who needs little introduction to harpists as one of the most creative and impressive virtuosi of the modern trad scene. He pushes aside the imaginary borders we sometimes impose on our musical perspectives, combining Breton and other Celtic roots with improvisation, jazz, sound processing and other contemporary sound worlds. “I’m aiming”, says Nikolaz, “for complete solo freedom. We each contain a world within us, immense and waiting to be sung.”